Ok so I never did have time to bake the blueberry muffins for the camping trip. It was a non-issue. We had a blast! Ezrah brought his friend Anthony. Check out our pics! 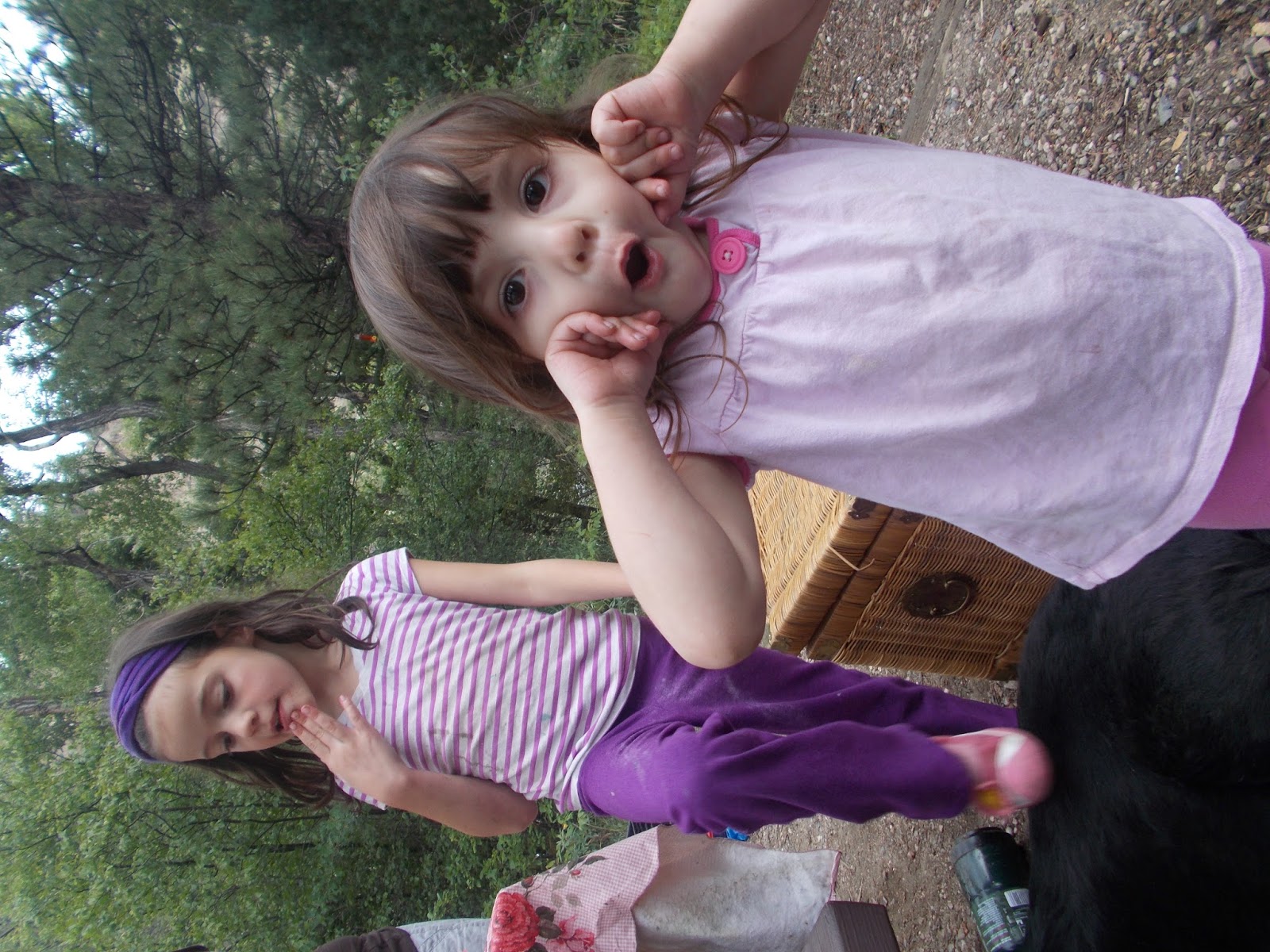 Last Camping Trip of the Summer

In about 3 hours, well in reality 4 hours, the family is off to our last camping trip in the Poudre Canyon. I have an awful sprained ankle. But I'm Mommy, so I will prevail! Two nights ago, I managed to step into a whole in our backyard and fall while I was calling Dan. In the next to minutes, Princess had my phone in her hand because it flew out of my hand and the phone was in the kiddie pool. So no phone yesterday as it was in a bowl of rice drying out.
The next 3 hours will consist of me making blueberry muffins, packing food, marinating chicken breasts and packing everyone else's stuff. I left this stuff until this morning because I was so darn tired last night. Sure, i'll wake up early enough and do it all. But here I am in the garage, drinking coffee and still tired. Someone once told me that to be a mom is to be tired. This pessimistic view is starting to ring true.
It's just a one-nighter but God-forbid I forget anything important. At east we don't have to look t houses. Even the one house that we are moving into, I STILL haven't even seen yet. Oh well, it is what it is.
Time to bake the muffins!
Posted by Mama Leigh at 7:23 AM No comments:

So we finally have a house and it's over! Which one did we end up with? Well, it was a crazy weekend with the house stuff was super stressing. So on Saturday, we still didn't know if for sure if the Columbia house was ours to rent. I still didn't know if I even wanted that house because I have not been inside to see it! Dan didn't care and feels that we know it has the square footage and is in such a great location, that we cold make it work. I kind of feel that way too, but it's still hard to commit to a house you haven't even seen! Especially when you are about to sign a lease on a beautiful 5-bedroom house.
Yes, we had an appointment to sign the lease on the Village lane house at 3pm that day. I had to leave early in the morning to pick up Jack from the airport. He was returning from a 2-week trip in Florida with my parents. So I was a bit out of touch most of the day. Not knowing what house to dream of. I knew I needed to stall the lease signing of the Village house. This was risky being the competition for housing in Fort Collins is so high and we couldn't seem to find anything, so I did not want to lose the Village house if the Columbia house didn't come through. I had to somehow stall the lease signing.
I texted the owner Saturday morning and told her Dan had to work and that we had to do the lease signing on Sunday, the next day. That was a lie, but I wasn't going to tell her that there was another house in the mix. God forgive me for the lie. Dan said we had to look out for #1. #1 being our 4 kids.
Dan was never crazy about the Village house because of the location, but I liked it. The Columbia house, is in Mission Hills and it next to impossible to find a rental there. We had given up searching for a house here. The Columbia house is big enough and the location is prime for the kids' school and Dan's work. We got a call Saturday afternoon at the exact time we were to be signing the lease on the other house and were told that we could rent out Columbia if we wanted it! Dan really really really wants this one. So, I chose a house that I have not seen to live in for at least the next few years. Columbia St, here we come!

I felt like my karma wasn't perfect in all this.
The reason we got this house is because the college kids that live there are being evicted. The owners on Village Lane were so nice and they didn't show the house for a whole week because they thought we were moving in. The kids at Columbia being evicted wasn't our fault and the neighbors had been complaining for years, but still. They were not evicted until Saturday and I can't help but think that the fact that our friend, Nate, the landlord for Columbia, knew we needed a house to rent and loved that area, sort of put the eviction into motion. He says that's not the case and that they are short on rent every month and the neighbors are very serious about wanting them evicted. I just don't want people to evicted from their home. I shouldn't feel bad about the owners on Village lane, but when I told her for sure Saturday evening that we weren't going to move in, she was really disappointed and even said, "that sucks for us." Like I said, competition for rentals is high and they shouldn't have any trouble renting that beautiful house. Another house we went for in that same area had 15 applications. I just think she knew we wouldn't really  taken good care of that house. We would have.
So now we are moving into a beat-up college house (boy's college house) in an amazing area of Fort Collins. And the real kicker is of course that I have NOT even been inside of this house! And I have seen countless homes the past 3 weeks and I actually end up renting one we haven't even been in. I only have pictures and it does not look pretty. I can barely see the rooms amongst the pool table and red Solo cups on the counters and tables and the mish mosh couches. I'm not a snob or anything, but I can literally see the dirt on the cottage cheese ceiling in the family room.
It can be cleaned, fixed, new carpet and floors. You can't fix location. I'm getting excited!
Posted by Mama Leigh at 5:53 PM No comments:

What is Attachment Parenting?

Advertise on my Site!